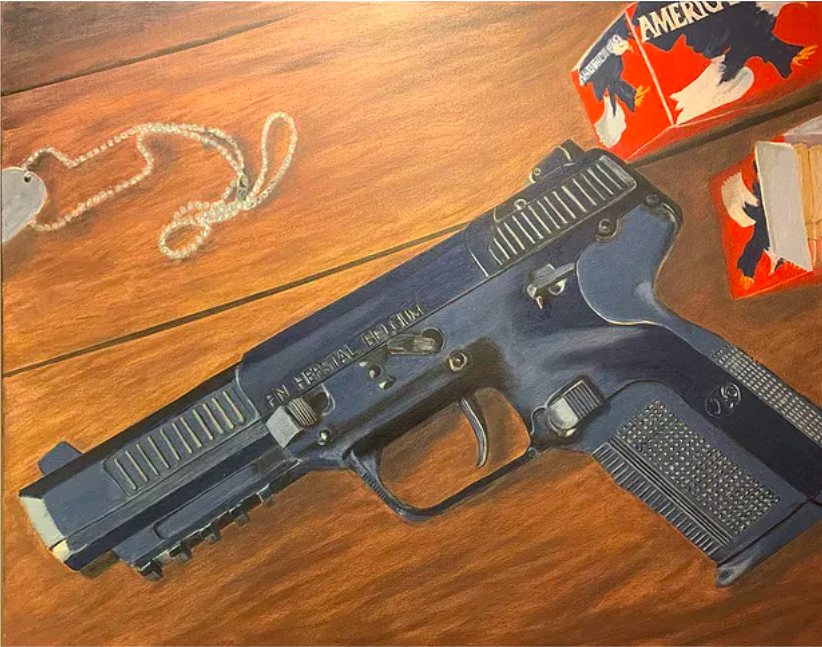 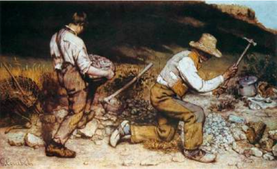 “Everyday scenes that delve into our communal psyche leave me with endless questions. My current work explores the Army town of Killeen in Central Texas where I grew up. While all military installations have a certain energy that might clash with their small-town hosts, Killeen/Fort Hood has experienced three mass shootings since 1991.”
- Melanie Martinez

Annabel Marshall: I just kind of wanted to start off with your process, so I know you’ve said that you work in oil just because you can edit and you can work with it more, just because it does take longer to dry but what does your process look like as far as time frame?

Melanie Martinez: Well I usually start with going to the location and taking a lot of photos and then mulling through those and trying to crop them and starting to get the composition in the photo first. And then I will project that onto the canvas and then I do an under painting with a more matte oil paint called fast matte, and that just kind of gives me the basic colors that I’m going to use that are usually brighter… and then I can start layering on the oil and I tend to use somewhat of a more dry brush once I get a few layers on, rather than working wet on wet. I usually let the layers dry before I move onto the next layer.

A: There’s something that’s very beautiful about a layering process and adding more detailing into a piece, is that something that you do with a lot of your work that’s not oil?

M: I do, I’ve been doing some watercolors, I had a couple of ink drawings on my website, and with those I was trying to layer more time, like the past and the present into the same image, so layering images with the colors bleeding through and some grayed out, some more colorful.

A: What a beautiful concept to incorporate into your work. As far as research across the mediums you use, you do photos but is there any kind of “background research” that goes into specific locations?

M: The subject I’ve been working with lately, with the gun violence and mass shootings that have happened in Killeen. I’ve done more research with those particular events, and with everything happening in the news whenever there’s another shooting I just can’t help but thinking about everything I’ve been researching and what we’ve all experienced. I think everybody has some connection to somebody that’s been a witness, or somehow been affected by that. So, you know, I read books and I’m drawn to documentaries, the movie Bowling for Columbine really influenced me toward this theme just seeing the connections between the community in Colorado and the community of Killeen, military being right there.

A: And you did mention that in your thesis, just the connections that you saw between the military base in Columbine and then in your own small town. You’re from Killeen, are your parents form there?

M: Well they’re from South Texas, The Valley, but my father was in the military so they moved around a lot and they retired at Killeen, Fort Hood, so I grew up there till I was 18 really, and then I came to Austin.

M:  I got a Bachelor’s Degree in Liberal Arts from The University of Texas and I was studying journalism and I ended up doing a lot of internships and working at papers and things that I just switched over to English but I had all that journalism still working and I was really drawn to investigative reporting and just deeper, bigger and more involved stories, rather than the daily snippets. I was just a cub reporter but I was able to work with amazing investigative reporters and assisting them in research with them and it was just so inspiring to dig in and try to find the story behind what we all hear and what gets watered down.

A: Right of course, I think that’s something that’s very important in pop culture right now and what’s happening in the news as far as true investigative reporting and true journalism and there is a lot of swing that I think can happen in every single newspaper and even in photographs down to how images are cropped. Do you think that you have certain aspects of that in your paintings?

M: Oh yeah, I do. I mean I try to zero into things that I think are clashing or are somehow symbolic and I’ll crop out something that doesn’t help tell my story and just direct the viewer more to the point that I’m trying to get across or just to things that they might want to poke around and find interesting rather than just “Oh it’s just a football game.”

A: You said the word “clash”, things that clash do you think that you’re looking more for contrast?

M: More like a dissonance, like a cognitive dissonance, where people don’t even realize, they know something’s off but they can’t quite, like they love it, but there’s something a little off and you just kind of get a little itch about it and it’s like, “What is it?”

A: Especially when it comes to smaller towns, where everyone knows each other and gun violence can cause an even greater impact… how small is Killeen exactly?

M: It’s probably a little bigger than San Marcos, but the military instillation next to it is huge, it’s one of the biggest in the world as far as land where they have training and things and different divisions within the army, so there’s a lot going on that effects the town and all the businesses there rely on that, it’s almost a factory town for the military.

A: It’s interesting that that’s so large in booming next to such a small city, there’s something about the contrast of that, that’s very interesting as well.

M: I think a smaller town is going to really want that investment, the money coming in, because otherwise, what do they have? Because a lot of their industries, you know ranching and farming it’s kind of drying up.

A: So, you’ve done a lot of journalistic history, as far as artistic history what is your background or your primer to what you’re doing now?

M: I’ve always enjoyed doing any kind of art, I’m one of those people that take classes in everything, soap making, paper making, calligraphy, but I was taking some visual communications classes at Austin Community College and I started liking illustration a lot. I ended up meeting my birth family, I was adopted, and my birth father was a really accomplished painter and his specialty is water color and landscapes and really surreal hippy things, and that just kind of gave me more validation about pursuing art that maybe there was something in me that was genetic or that I would have some of these abilities. So, I just started taking more of these classes and was just inspired by my family and their work. I came here to go into interior design, and I’ve been involved in historic preservation and I wanted to do design related to that, but I took a rendering and one of the professors here was really encouraging. I just started taking more and more classes in the art department and I had to many credits from community college, so it just made sense to get two degrees. And I was just real excited with the painting program here and the professors here are great.

A: So, to kind of switch gears here a little bit, as far as artistic styles and influences, you mentioned a few names in your thesis but I was wondering kind of broader stylistic influences?

M: Well the social realists, like Grant Wood is one, [American Gothic], everyday life. Going back even further, I guess the precursor to all that was the realist Courbet and The Stone Breakers, that sort of history sort of leads up to where I’m going, to showing more everyday people and scenes of life. The political art of Diego Rivera inspired me [as well], and I spent some time in Mexico City and was able to see a lot of those murals and just the stories that are wrapped up in the narrative content. Just being a writer, I just love stories and being able to tell a lot in one image. Another would be Magritte; The illustrative style is somehow similar and just how it’s a little bit off.

A: There was a particular painting on your website that stood out to me it was just very head on, it was just a gun, ornate and decorative, can you tell me a bit about the background of the piece?

M: Well that is the type of gun that the shooters in Killeen had, and it’s a really common gun that mass shooters use, because it’s just common, it’s something the military issues, so people are very familiar with it. I’m not a big gun person, but when I would carry [the painting] to class people would tell me things about it. People can take that whichever way but I wanted to, I didn’t want to say, there’s a lot in there with the American bullets and the military dog tags, so not necessarily saying is it the military, is it the gun is it America, who is the killer? But definitely that gun kills people.

A: As far as inspiration goes, not just pertaining to artists and art styles, but just your everyday life, is it more one off things like the couple, and you just had to paint it, or is it things that you’re mulling over for a long time, or is it a combination in your work?

M: I think the things I’m mulling over are always there and then I see something and then it seems to click like, “There it is right there in front of me!” or yeah it could go either way like I could see something and just start wondering. When I was a kid, we would take a lot of long trips and my dad would just say “Tell me a story about the people in that car.” So maybe that has stuck with me a little bit, thinking about the people I see and how do they live. I’ve traveled a lot around the US and seen some really poor places and crazy disturbingly rich places, and so just to know that’s going on while this is going on and somehow wanting to put that together.